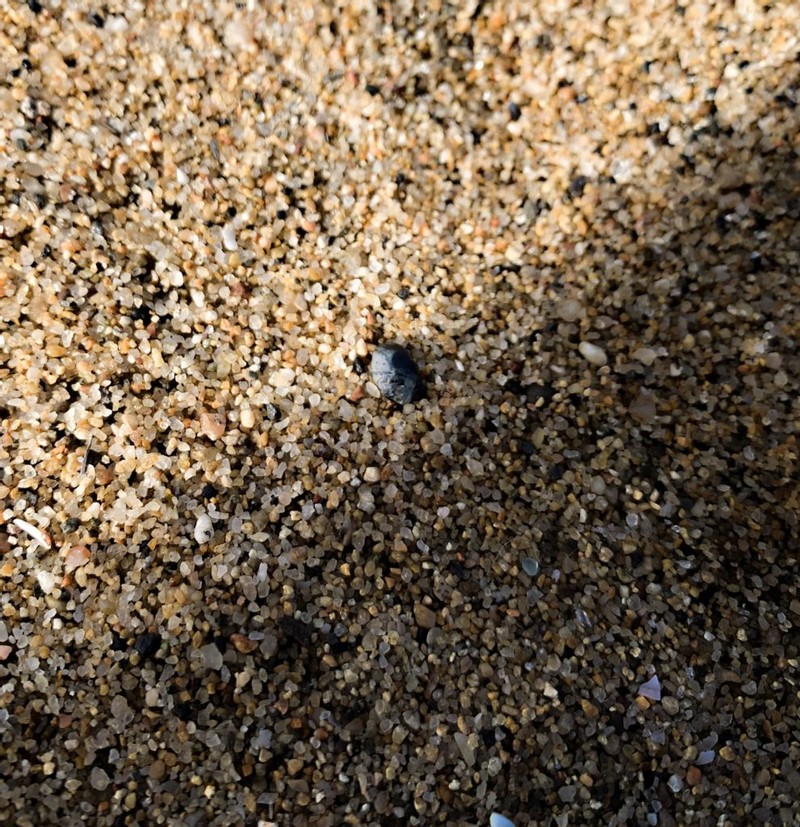 I’m sorry, I was distracted and I nearly didn’t see you there. I’ve been very distracted lately. But I’ll take a moment from being distracted to sit here with you, if you don’t mind. Maybe while I’m here, you could tell me your story? Where do you come from? Did it take you long to get here? You’ve been around for many years, I’m sure, and probably have lots to say. Were you once a larger stone? Part of something bigger? Was it through wind and wave, tumbling, year after year, that you found yourself a little smaller than before?

Maybe among the billions of trillions of other little stones and shell fragments on this beach, there are cousins, brothers, sisters, those with whom you enjoyed sharing hours feeling the sun on your faces, stones you once cared about very much — pieces of you — somewhere about? Do you miss them? Do you wish they were still part of you? When a wave or gust of wind or the feet of a running child kicks you into the air, do you search for them? Do you sometimes think you see them, in that flash of a moment, somewhere out along the crowded shore? Does this make you feel sad? Everything craves connection. Why else do you all gather here in such numbers if you didn’t want to be close? There’s so many other little stones on your beach and you’re always surrounded, but maybe you still feel alone. Or maybe you enjoy feeling surrounded and seeing other little stones and so you usually don’t…or maybe, when you close your eyes, in the dark nights when there’s no moon and the crowd is hidden from your sight, you must surely feel alone then. How could you not? Feeling things is natural, even alone, even for a little stone.

So, you might not be as big as before. You might even feel that way sometimes. And you might be alone in this life. And you might even feel that sometimes. I could point out that you’re still one of the biggest on this beach. I could repeat that you’re but one of a great many, some of which share similar feelings and even similar experiences. Instead, there’s something else I’ll ask you to consider before the next wave comes to carry you off: Notice how smooth your edges have become. Sure, you still have a few rough bits and ends, and scars that could remain for years to come, but mostly your shape has softened and evened out.

Think back to your earlier, more fiery days: how powerful you felt that the ocean and earth itself would give way to the weight of your presence, your ragged edges tearing through the land around you, proudly making marks on others, casting shadows over entire towns. You were once fire itself! Flowing and taking, all in the service of making yourself bigger. And though we could say that era served a purpose in shaping both you and the world around you, you now find yourself in another season. And everything has seasons. We might say that a season is a moment in time where things are not quite like how they once were. Where most everything you remember is still there, just different somehow. And seasons come and go, sometimes they feel like they’ll never go and sometimes they’re gone before you realize. These days, you feel a stronger kinship with the waters of the ocean — not the crashing waves or the frozen, mountainous icebergs, but the more serene, life-sheltering tide pools you spent time in once. You strive to be like them. Not too cold, not too hot. And not to malign the magnificence of others in their seasons, but you’ve seen it yourself, nothing grows under crashing waves or on frozen icebergs.

Though, perhaps, that isn’t always exactly so. You spent centuries under those crashing waves. Decades smashing against icebergs. Some might say that you’ve been worn down, but know better, little stone. Just as you in your reigning seasons carved little stones from once majestic peaks, the same waves and wind and time that have taken so much from you, have been at the same moment, giving you more than you could imagine. They’ve been revealing you, little stone.

Because even in you, there are littler stones waiting to be born, wrought from nothing less than time and turbulence. And within them are littler stones still. All the way down, deep within them, to a place where things stop being stones or shells or water or any of the other things you might know about from a life in the ocean or on the beach. In fact they really stop being things at all. They become one thing. An incomprehensible ocean of infinity inside an impenetrable singularity. And that’s really what you are, little stone. All the way down, deep within every little stone, as deep as deep goes, is the same thing that is everything. And that’s really what you are, little stone.