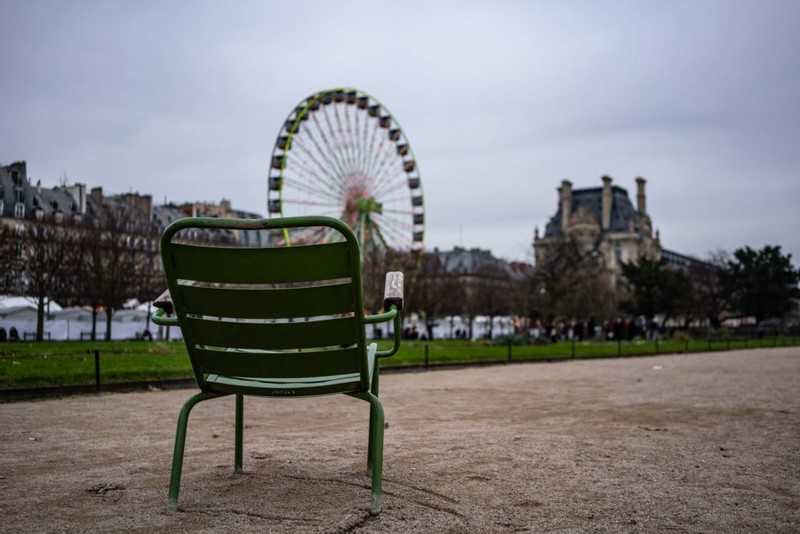 “What is essential is invisible to the eye.” — Antoine de Saint-Exupéry

Notice the drag marks in the dirt. Behind me there were two other chairs pointed towards the fountain in the center of the park without marks under them. What are we seeing and what’s missing? If the person were still sitting in that chair, this would be a photo of a person watching the Ferris wheel. Without the person, what’s left are the clues of their actions, a ghost of their choice.

I wanted to photograph that ghost. The ghost that I saw and understood. It was a choice someone made to not watch the fountain, perhaps as everyone else had been, but to instead spin around and watch the Ferris wheel. Beyond that, we can create any story we wish. I think…

It was nothing but another night, the fountain was dim, but the wheel was rainbow bright.

Between L’Orangerie and the Louvre, a cold, down, Paris mood.

Everywhere she looked, shadows were cast, just the people of the wheel, kaleidoscoping past.

To seek a different view, to appreciate something new, to glean from the people of the wheel, every shimmering shade of their hue, so long as it glimmered, and was anything but blue.

Do you think something different could have happened?

Maybe it was something simpler and didn’t involve a person at all… Maybe a bird who was in a very big hurry was flying low to avoid the rush hour bird traffic, zooming and swooshing in between slow moving tourists, feeling quite sleek until for a moment he was distracted by some bread that one of the tourists was eating and smashed into a chair sending it spinning. When he finally recovered and made it back into the air he realized he had just lost all the time he had made up earlier and would never get it back. So he made a mental note to shit on the next tourist he saw eating a baguette.